Discover the joy and wonder of Mary Poppins in the classic adventures!

Read by Olivia Colman, this stunning performance lifts P. L Travers's words off the page, transporting us back to a time where classic storytelling is at the heart of any story.


When the East Wind blows Mary Poppins into the home of the Banks children, their lives go topsy-turvy and are changed forever.

P.L. Travers, born in 1899, grew up on a sugar plantation in Australia, one of three sisters. Pamela deliberately kept her life very private. She lived for a while in Ireland and London, and travelled frequently to America, where she was made writer in residence to both Smith and Radcliffe Colleges in Massachusetts.

She also received an honorary doctorate from Chatham College, Pittsburgh. Although she worked as a secretary, a dancer and an actress, writing wasP.L. Travers' real love, and for many years she was a journalist.

It was while she was recuperating from a serious illness that she wrote Mary Poppins - 'to while away the days, but also to put down something that had been in my mind for a long time,' she said. She wrote eight Mary Poppins books altogether and several other children's books as well as adult books.

Be the first to review Mary Poppins. 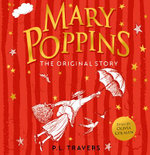