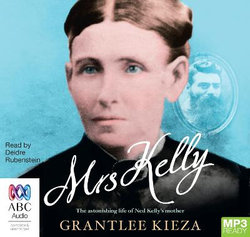 Be the first to write a review
Tweet
24%
OFF RRP  $49.95 $38.35
When Ned Kelly's mother, Ellen, arrived in Melbourne in 1841 aged nine, British convict ships were still dumping their unhappy cargo in what was then known as the colony of New South Wales. By the time she died aged 91 in 1923, having outlived seven of her 12 children, motor cars plied the highway near her bush home north of Melbourne, and Australia was a modern, sovereign nation.