Omerta is the Mafia code of silence. So when an important mob boss is assassinated no one will talk. His nephew and the head of the New York FBI begin their own investigations into his murder, but the silence spreads like a contagion - the silence of rival gangs, the silence of crooked bankers - even the silence of the courts...But the world of the Mafia is a world without integrity and riven with greed, where everyone has a price.

His best-selling novel The Godfather was preceded by two critically acclaimed novels, The Dark Arena (1955) and The Fortunate Pilgrim (1965). In 1978 he published Fools Die, followed by The Sicilian (1984), The Fourth K (1991), and the second instalment in his Mafia trilogy, The Last Don (1996), which became an international bestseller.

Mario Puzo also wrote many screenplays, including Earthquake, Superman, and all three Godfather films, for which he received two Academy Awards. He died in July 1999 at his home in Long Island, New York, at the age of seventy-eight.

Be the first to review Omerta. 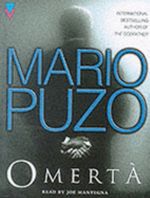 Contemporary fiction Adventure Thriller / suspense
Hold on while we process your request.