Be the first to review Ready Player One. 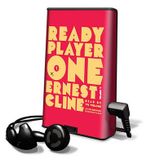 Adventure Thriller / suspense Science fiction
Hold on while we process your request.