When Patrick Truman is found beaten, bound, and left for dead, sixteen-year-old loner Cat is determined to discover the truth of what happened to her former best friend. The local sheriff blames out-of-towners, but Cat is sure someone in their small, tightly knit Southern community is guilty of the crime. Patrick is gay, and for years he has been teased and bullied by people claiming to be his friends, people Cat calls "the redneck posse." She plans to start her hunt for the culprit with them. But there are two problems. Cat's brother is a member of the posse, and so is the boy who assaulted Cat years ago, forcing her into the self-imposed exile from which she must now emerge...for Patrick and for herself. Against a backdrop of poverty, clannishness, and intolerance, Myracle has crafted a searing coming-of-age story.

Be the first to review Shine. 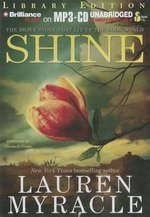