A Dead Man in Malta

Malta, 1913, and hot air balloons hover over the Grand Harbour.

One of them comes down in the water but no one is hurt except that the balloonist dies later when taken into the Naval Hospital for a check-up. But he is not the only one who had died there unexpectedly, as a letter to The Times points out, and a special investigator, Seymour of the Foreign Office, is sent out from London to find out what is going on.

For in 1913 Malta is still a British protectorate, governed by the British; indeed, with its red postboxes, English beer and English language it seems like an exotic Little Britain. But the rumblings of war are reaching out to that small island in the Mediterranean and many of the old Maltese families are becoming divided in their loyalties: at the same time staunchly supportive to the British and yet starting to question Malta's subordinate status and wondering whether the time has come to strike out an independent path for themselves.

So the letter to The Times has touched a raw nerve, as Seymour soon finds out: is it a critique of bad nursing practises? Or is there a different, more sinister explanation to these sudden deaths?

Be the first to review A Dead Man in Malta. 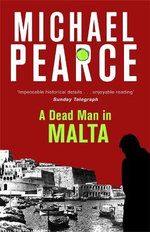 A Dead Man in Malta

Crime & Mystery Historical mysteries
Hold on while we process your request.