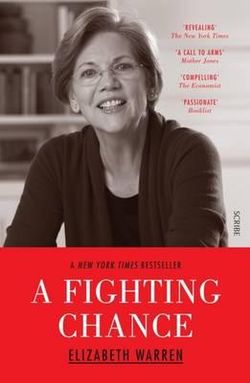 An unlikely political star tells us how Washington really works - and really doesn't.

An unlikely political star tells us how Washington really works - and really doesn't.

As a child in small-town Oklahoma, Elizabeth Warren yearned to go to college and become a teacher. Early motherhood seemed to put that dream out of reach, but fifteen years later she was a distinguished law professor with a deep understanding of why people go bankrupt. Then came the phone call that changed her life- could she come to Washington to help Congress rewrite the bankruptcy laws?

So began an unsentimental education in the bare-knuckled ways of Washington. She fought for better bankruptcy laws for ten years, and lost. She tried to hold the federal government accountable during the financial crisis, but became a target of the big banks. She tried to protect consumers from predatory bankers, but was thwarted. Finally, at 62, she decided to run for the Senate, and won.

In this passionate, funny, rabble-rousing book, Warren shows why she fights tooth and nail for the middle class - and why she has become a hero to all those who believe that America's government can and must do better.


'A revealing account of Warren's rise to prominence ... Warren's arguments demand to be taken seriously ... As a politician and activist, Warren's great strength is that she retains the outsider's perspective, and the outsider's sense of moral outrage, which runs throughout A Fighting Chance ... She's an indomitable battler for the underdog, and she doesn't take no for an answer.'
-The New York Review of Books

' Warren displays a down-home charm and an effortless rapport with everyday people ... The book is more memoir than manifesto; Warren emerges as a committed advocate with real world sensibility, who tasted tough economic times at an early age and did not forget its bitterness.' STARRED REVIEW
-Publishers Weekly

'A passionate memoir of one woman's personal story and the larger story of corruption in financial circles and the need for reform that balances the interests of the American middle class against those of the corporate section ... Warren offers a behind-the-scenes look at the political dealmaking and head-butting machinations in efforts to restore the nation's financial system.' STARRED REVIEW
-Booklist

Be the first to review A Fighting Chance.