A Grim Almanac of Devon

The history of Devon is full of dark deeds and horrible happenings. Among the county's more macabre claims to fame are England's first documented serial killer, Robert de Middlecote, the murderous monk, believed to have been executed in 1329; the hanging of three women in Bideford in 1682, thought to be the last women put to death for witchcraft in the land; and conversely the saga of John 'Babbacombe Lee', the convicted killer who in 1885 became the 'man they could not hang'. There are also the disasters of Exeter's Theatre Royal, burnt to the ground in 1887 with the loss of around 186 lives; the Lynmouth floods of 1952 which claimed 34 victims; the mysterious death of journalist Bertram Fletcher Robinson, whose death may not have been the result of typhoid contracted after drinking contaminated tap water, but ruthless elimination by a famous rival; and the sad case of the boy of 9 who died after choking on a balloon attached to a string of liquorice. All these, plus tales of murder, suicide, accidents by land, sea and air, are here.

Be the first to review A Grim Almanac of Devon. 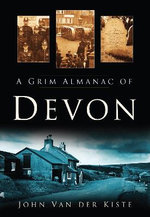 A Grim Almanac of Devon

British & Irish history Local history
Hold on while we process your request.