This item qualifies for FREE delivery
A.J. Tomlinson (1865-1943) ranks among the leading figures of the early Pentecostal movement, and like so many of his cohorts, he was as complex as he was colorful. Arriving in Appalachia as a home missionary determined to uplift and evangelize poor mountain whites, he stayed to become the co-founder and chief architect of the Church of God (Cleveland, TN) and the Church of God of Prophecy, which together with their minor offspring now constitute the third-largest
denominational family within American Pentecostalism. R.G. Robins's biography recreates the world in which Tomlinson operated, and through his story offers a new understanding of the origins of the
Pentecostal movement. Scholars have tended to view Pentecostalism as merely one among many anti-modernist movements of the early twentieth century. Robins argues that this is a misreading of the movement's origins-the result of projecting the modernist/fundamentalist controversy of the 1920s back onto the earlier religious landscape. Seeking to return the story of Pentecostalism to its proper historical context, Robins suggests that Pentecostalism should rightly be seen as an outgrowth of the
radical holiness movement of the late nineteenth century. He argues that, far from being anti-modern, Pentecostals tended to embrace modernity. Pentecostal modernism, however, was a working class or
"plainfolk" phenomenon, and it is the plainfolk character of the movement that has led so many scholars to mislabel it as anti-modern or fundamentalist. Through the compelling narrative of Tomlinson's life story, Robins sheds new light on late-nineteenth and early-twentieth century American religion, and provides a more refined lens through which to view the religious dynamics of our own day. v

Be the first to review A. J. Tomlinson. 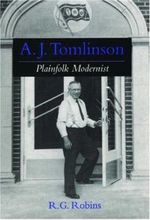