A Jewish Understanding of the New Testament

An in-depth look at the Christian scriptures--from a Jewish perspective.

Many Jewish people know the New Testament only through snippets of verse heard at a Christian wedding or funeral, or through a chapter read in literature class. Many are completely unfamiliar with the meaning or messages of Christian scripture and therefore hold strange or startling judgments about it.

A Jewish Understanding of the New Testament introduces the text to Jewish readers. Samuel Sandmel applies scholarly criticism and provides historical background to the writings of the New Testament, revealing how the sacred literature of other religions can provide fresh perspectives on one's own beliefs.

Without compromising his Jewish identity or encouraging any traditional Jewish stereotypes of the New Testament, Sandmel offers an enlightened view of Christian beliefs and encourages readers to acknowledge their common humanity with people of all religions. (Previously published by KTAV Publishing House, 1974, ISBN 0-870682-628.)

Rabbi Samuel Sandmel was professor of Bible and Hellenistic Literature at Hebrew Union College-Jewish Institute of Religion, and author of many highly regarded books in the fields of Jewish and Bible studies.

Be the first to review A Jewish Understanding of the New Testament. 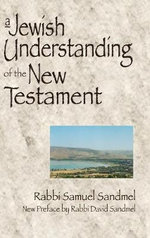 A Jewish Understanding of the New Testament