One evening, five-year-old Saroo left his poor village home in India to watch his older brother work at the next town's train station. His life was about to be utterly transformed. Lost and alone on an unfamiliar train, he found himself taken across the country and deposited in a strange city, unable to explain who he was or where he was from. He'd arrived in Calcutta. After weeks of defying the odds on the city's notoriously dangerous streets, Saroo was taken in by a government agency and, after failed attempts to find his family, was miraculously adopted by an Australian couple, the Brierleys, and taken to start a new life in Hobart. As an adult, though, he never forgot his Indian roots and kept trying to work out where he came from. With the advent of Google Earth, his long inquiry began to bear fruit: as the technology improved, he was, against all the odds, able to find what he thought was his home neighbourhood of Ganesh Talai - and go in search of his family. Even more astonishingly, he found them.
Here, Saroo Brierley tells the extraordinary story behind this otherwise ordinary 32-year-old Aussie bloke, from the dirt floors of his birth home to the hills of Hobart and back again. He describes his incredulity at finding his birth mother, his heartbreak at learning of his brother's fate, and that fateful day over a quarter of a century ago.

He lives in Hobart, Tasmania. 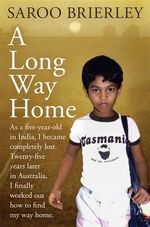 Memoirs Australian Books
Hold on while we process your request.