During the Russo-Japanese War (Classic Reprint)

Excerpt from A Staff Officer's Scrap-Book: During the Russo-Japanese War IT is difficult to convey to the peaceable citizens of Greater Britain a true picture of that glorious and impressive survival from heroic times, a nation in arms. The difficulty is enhanced by the fact that military history must be always to some extent misleading.

If facts are hurriedly issued, fresh from the mint of battle, they cannot be expected to supply an account which is either well balanced or exhaustive. On the other hand, it is equally certain that, when once the fight has been fairly lost or won, it is the tendency of all ranks to combine and recast the story of their achievement into a shape which shall satisfy the susceptibilities of national and regimental vain glory. It is then already too late for the painstaking historian to set to work. He may record the orders given and the movements which ensued, and he may build up thereon any ingenious theories which occur to him; but to the hopes and fears which dictated those orders, and to the spirit and method in which those movements were executed, he has for ever lost the clue. On the actual day of battle naked truths may be picked up for the asking; by the following morning they have already begun to get into their uniforms, If the impressions here recorded possess any value, it will be because they do faithfully represent the facts as they appeared to the First Japanese Army while the wounded still lay bleeding upon the stricken field. Further than this they do not profess to go.

Be the first to review A Staff Officer's Scrap-Book. 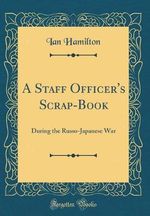 Warfare & defence Military history
Hold on while we process your request.