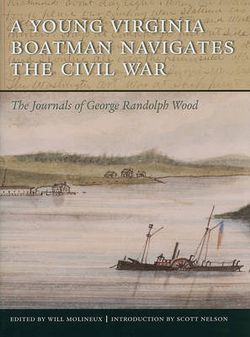 The Journals of George Randolph Wood

George Randolph Wood filled several journal books with personal remembrances of life in nineteenth-century Hampton, Virginia; particularly of his experiences aboard river and canal boats transporting supplies for Confederate troops along the James River during the Civil War. Wood wrote about his experience because he thought it might interest his family, but his writing is of interest to a more general audience because of the scarcity of information about those who worked on river boats and supply barges during the war.

In his later life, Wood was a druggist by profession and his writing lacks the sentimentality often found in reminiscences, and his terse, non-flowery style is interspersed with wit and honest observations of wartime spent on the James River, its tributaries, and the canal above Richmond.

The Wood family evacuated Hampton and initially found sanctuary in City Point. They tramped over the corpse-strewn Malvern Hill battlefield. They lived in Richmond where Wood's oldest brother, Robert, was imprisoned as a Union sympathizer. And they found accommodations in a crowded mansion on the bank of the Appomattox River before returning through the lines to the ruins of Hampton.

Wood watched artillery shells descend in his direction; attended scores of theatrical performances in Richmond; visited encampments of Hampton boys; twice saw Robert E. Lee; went hungry, yet sampled caviar; was detained at Fort Monroe; helped to build a house--and may have even cast a vote for Abraham Lincoln (in a mock presidential election). Historian Scott Nelson has written an illuminating essay on how Wood captures the dilemma of people living along the James River trying to survive between the battle lines of Union and Confederate troops, and how this account provides new and valuable information for scholars and students alike. Published in association with the Port Hampton History Foundation for the Library at the Mariners' Museum

Be the first to review A Young Virginia Boatman Navigates the Civil War.