A Mother's Murder, a Daughter's Search

" Perry] is a wonderful writer...Beauty and tenderness rise up through the darkness... She] succeeds in restoring her mother's humanity, and her own." --Bliss Broyard, The New York Times Book Review

A fierce memoir of a mother's murder, a daughter's coming-of-age in the wake of immense loss, and her mission to know the woman who gave her life.

When Sarah Perry was twelve, she saw a partial eclipse of the sun, an event she took as a sign of good fortune for her and her mother, Crystal. But that brief moment of darkness ultimately foreshadowed a much larger one: two days later, Crystal was murdered in their home in rural Maine, just a few feet from Sarah's bedroom.

The killer escaped unseen; it would take the police twelve years to find him, time in which Sarah grew into adulthood, struggling with abandonment, police interrogations, and the effort of rebuilding her life when so much had been lost. Through it all she would dream of the eventual trial, a conviction--all her questions finally answered. But after the trial, Sarah's questions only grew. She wanted to understand her mother's life, not just her final hours, and so she began a personal investigation, one that drew her back to Maine, taking her deep into the abiding darkness of a small American town.

Told in searing prose, After the Eclipse is a luminous memoir of uncomfortable truth and terrible beauty, an exquisite memorial for a mother stolen from her daughter, and a blazingly successful attempt to cast light on her life once more.

Be the first to review After the Eclipse. 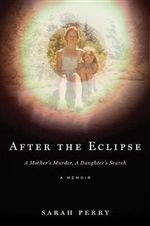