Alexandra Park Prize Essays. Essays on the Capabilities and Development of the Alexandra Park. by R. G., and M. A. Morel. with Selections from Other Essays Received by the Committee. Edited by B. Ringrose

Title: Alexandra Park Prize Essays. Essays on the capabilities and development of the Alexandra Park. ... By R. G., and M. A. Morel. ... With selections from other essays received by the Committee. [Edited by B. Ringrose.]Publisher: British Library, Historical Print EditionsThe British Library is the national library of the United Kingdom. It is one of the world's largest research libraries holding over 150 million items in all known languages and formats: books, journals, newspapers, sound recordings, patents, maps, stamps, prints and much more. Its collections include around 14 million books, along with substantial additional collections of manuscripts and historical items dating back as far as 300 BC.The FICTION & PROSE LITERATURE collection includes books from the British Library digitised by Microsoft. The collection provides readers with a perspective of the world from some of the 18th and 19th century's most talented writers. Written for a range of audiences, these works are a treasure for any curious reader looking to see the world through the eyes of ages past. Beyond the main body of works the collection also includes song-books, comedy, and works of satire. ++++The below data was compiled from various identification fields in the bibliographic record of this title. This data is provided as an additional tool in helping to insure edition identification: ++++ British Library Glover, Richard; 1871. 8 . 10350.cc.22/12.

Richard Glover has written a number of bestselling books, including Flesh Wounds, The Mud House, In Bed with Jocasta, and George Clooney's Haircut and Other Cries for Help.

He writes a weekly column for the Sydney Morning Herald and presents the comedy program Thank God It's Friday on ABC Local Radio. 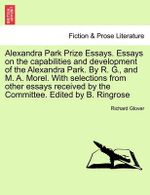 Alexandra Park Prize Essays. Essays on the Capabilities and Development of the Alexandra Park. by R. G., and M. A. Morel. with Selections from Other Essays Received by the Committee. Edited by B. Ringrose