by Ron Marz, Todd Klein,  Mark Schultz and others

Thirty years ago, James Cameron's Aliens introduced the world to a new kind of terror. Now, the stories that first brought the Aliens into the DC Universe are back in a horrifying collection Following the trail of a missing person from Gotham City, Batman travels to the Amazon jungle where he first discovers the horror of the Aliens--but how can the Dark Knight stop them? A few years later, an Alien is discovered in a Gotham City construction site, and it's going to wreak havoc on Arkham Asylum Thinking the terrifying menace gone, Batman discovers a colony of the relentless killing machines and the unstoppable race of hunters called Predators that have been hidden away on Earth for centuries. With both unearthly menaces poised to overtake the world, only the Dark Knight and Superman can stop them Finally, the Alien terrors are aboard the Stormwatch space station, and it's up to the WildC.A.T.s to save the survivors, but can even the WildC.A.T.s win a battle with the Aliens when Stormwatch has already fallen? Collects BATMAN/ALIENS #1-2, BATMAN/ALIENS II #1-3, SUPERMAN/BATMAN VS. ALIENS/PREDATOR #1-2, WILDC.A.T.S/ALIENS #1.

Ron Marz is a writer, mostly of comic books and graphic novels. He is well known for his work on Silver Surfer and Green Lantern, as well as the Marvel vs DC crossover and Batman/Aliens.

He also worked on the CrossGen Comics series Scion, Mystic, Sojourn, and The Path. At Dark Horse Comics he created Samurai- Heaven and Earth and various Star Wars comics. He has also done work for Devil's Due Publishing's Aftermath line, namely Blade of Kumori.

In 1995, he had a brief run on XO-Manowar, for Valiant Comics. His current creator owned projects include Dragon Prince (Top Cow) and Samurai - Heaven and Earth (Dark Horse).

Warren Ellis is a comics and graphic novel writer best known for the graphic novel series Transmetropolitan, The Authority and Planetary.

With over 35 graphic novels in print, Ellis has received numerous accolades, including winner of the International Horror Guild award for graphic narrative and being named one of Entertainment Weekly's 100 Most Creative People.

Rolling Stone described his work as "more influenced by Jesus and Mary Chain than by the Justice League, while his characters fight for left-wing agendas over God and country, and kick puppies in the street."

Be the first to review Aliens. 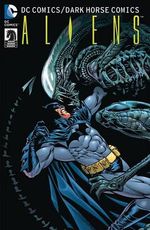 by Ron Marz, Todd Klein,  Mark Schultz and others