All the Buildings in London

That I've Drawn So Far

The follow-up to the hugely popular All the Buildings in New York, this is a charmingly illustrated journey through London, one building at a time. All the Buildings in London is a love letter to London, told through James Gulliver Hancock's unique and charming drawings of the city's diverse architectural styles and streetscapes. Hancock's offbeat drawing style gives a sense of whimsical and delightful fun to his illustrations, while perfectly capturing each building's architectural details. This unusual combination of the artistic and the technical presents London's cityscape like never before. The book includes such beloved iconic buildings as St. Paul's Cathedral and Buckingham Palace; the latest modern landmarks, such as the Shard and the London Eye; celebrated cultural institutions, such as the British Museum and Tate Modern; and other notable attractions, such as Piccadilly Circus and Trafalgar Square, as well as the bridges and docks along the river Thames. Also featured are the everyday buildings that may not be famous but whose stylishness or eccentricity make up an important part of London and its architectural landscape. Londoners and tourists alike will savor this volume that uniquely celebrates the energy, spirit, and history of one of the greatest cities in the world.

James Gulliver Hancock is a Sydney-born illustrator who has travelled the world drawing obsessively since he was a little boy.

His previous books include Meet… Banjo Paterson, Lonely Planet’s Not for Parents: How to be a World Explorer, and his All the Buildings in … series.

Be the first to review All the Buildings in London. 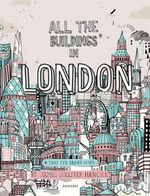 All the Buildings in London