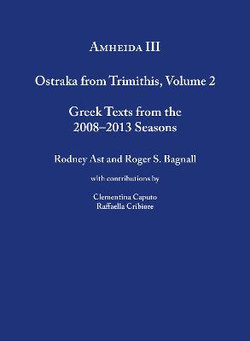 This archaeological report provides a comprehensive study of the excavations carried out at Amheida House B2 in Egypt's Dakhleh Oasis between 2005 and 2007, followed by three study seasons between 2008 and 2010. The excavations at Amheida in Egypt's western desert, begun in 2001 under the aegis of Columbia University and sponsored by NYU since 2008, are investigating all aspects of social life and material culture at the administrative center of ancient Trimithis. The excavations so far have focused on three areas of this very large site: a centrally located upper-class fourth-century AD house with wall paintings, an adjoining school, and underlying remains of a Roman bath complex; a more modest house of the third century; and the temple hill, with remains of the Temple of Thoth built in the first century AD and of earlier structures. Architectural conservation has protected and partly restored two standing funerary monuments, a mud-brick pyramid and a tower tomb, both of the Roman period.
This is the second volume of ostraka from the excavations Amheida (ancient Trimithis) in Egypt. It adds 491 items to the growing corpus of primary texts from the site. In addition to the catalog, the introductory sections make important contributions to understanding the role of textual practice in the life of a pre-modern small town. Issues addressed include tenancy, the administration of water, governance, the identification of individuals in the archaeological record, the management of estates, personal handwriting, and the uses of personal names. Additionally, the chapter "Ceramic Fabrics and Shapes" by Clementina Caputo breaks new ground in the treatment of these inscribed shards as both written text and physical object. This volume will be of interest to specialists in Roman-period Egypt as well as to scholars of literacy and writing in the ancient world and elsewhere.

Be the first to review Amheida III.