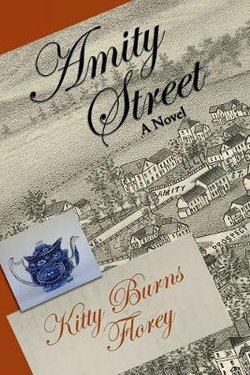 Amity Street is the sequel to Kitty Burns Florey's 2012 novel The Writing Master, which took place in New Haven in 1856. Amity Street moves ahead 35 years: it is now 1892. Anna Felice, a wealthy former opera star, travels from Rome, Italy, to America--to Manhattan, to New Haven, finally to Amherst, Massachusetts--in search of the truth about her birth.

In Amherst, Anna encounters the man who can shed light on the facts about her shadowy past. As the shocking story gradually the story comes clear, she also meets many of the town's inhabitants, including Hazel Cooper, the writing master's daughter, who fears she is condemned to a life of spinsterhood; Hazel's mother, Maud, an aging suffragist; a musically gifted young woman in need of guidance; and Hazel's cousin, the eccentric, enigmatic, oddly lovable Davey Chillick.

Much to Anna's surprise, as she learns the startling facts about her background, she begins to fall in love with a little country town and the people in it.

Amity Street is the product of the author's long admiration for Victorian novels and her fascination with social history. The research for the book encompassed fashion, railroads, cooking, the training of hawks, the teaching of singing, the suffragist movement, and the early days of baseball. Most of all, the novel is deeply immersed in the history--the architecture, the shops, the colleges, the farms, the customs--of a small New England town not long before the turn of the century, and the end of an era.

Be the first to review Amity Street.