IF YOU CAME ACROSS AN ABSOLUTELY REMARKABLE THING

WOULD YOU KEEP WALKING?

OR DO THE ONE THING THAT WOULD CHANGE YOUR LIFE FOREVER?

While roaming the streets of New York City at 3 a.m., twenty-three-year-old April May stumbles across a giant sculpture she calls Carl. Delighted by its appearance - like a ten-foot-tall Transformer wearing a suit of samurai armour - April and her friend Andy make a video with it, which Andy uploads to YouTube. The next day April wakes up to a viral video and a new life.

There are Carls in dozens of cities around the world - everywhere from Beijing to Buenos Aires - and April, as their first documentarian, finds herself at the centre of an international media spotlight.

Now April has to deal with the pressure on her relationships, her identity and her safety that this new position brings, all while being on the front lines of the quest to find out not just what the Carls are, but what they want from us . . .

Compulsively entertaining and powerfully relevant, An Absolutely Remarkable Thing grapples with how the social internet is changing fame and radicalisation; how our culture deals with fear and uncertainty; and how vilification and adoration can follow a life in the public eye.

'A fun, contemporary adventure that cares about who we are as humans, especially when faced with remarkable events' Kirkus (starred review)

'Hank Green hasn't just written a great mystery adventure (though he has), and he hasn't just written the most interesting meditation on the internet and fame I've ever seen (but he did that too), Hank has written a book [that] expands your mind while taking you on a hell of a ride' Joseph Fink, author of Welcome to Night Vale

'Fun and full of truth. To be honest, I'm a little irritated at how good the book is. I don't need this kind of competition' Patrick Rothfuss, #1 New York Times bestselling author of The Kingkiller Chronicles William Henry "Hank" Green II is an American entrepreneur, musician, educator, producer, vlogger, and author. He is known for his YouTube channel Vlogbrothers, where he and his brother, John Green, regularly upload videos, as well as for creating and hosting the educational YouTube channels Crash Course and SciShow.

Green co-created VidCon, the world's largest conference about online videos, with his brother John, and created NerdCon: Stories, a conference focused on storytelling. He is the co-creator of The Lizzie Bennet Diaries (2012–2013), a web series adaptation of Pride and Prejudice in the style of video blogs.

He is also the founder of the environmental technology blog EcoGeek and the Internet Creators Guild, and co-founder of merchandise company DFTBA Records, crowdfunding platform Subbable—acquired by Patreon in 2015—game company DFTBA Games, and online video production company Pemberley Digital, which produces video blog adaptations of classic novels in the public domain.

Green's debut novel, An Absolutely Remarkable Thing, will be published in fall 2018.

Be the first to review An Absolutely Remarkable Thing. 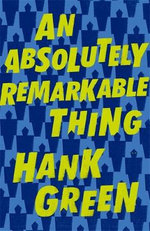 Contemporary fiction Science fiction Fiction Fantasy
Hold on while we process your request.