Anatole France - the Revolt of the Angels

At seven o'clock on the evening of that day, having as usual replaced all the books which had been taken from their shelves, and having assured himself that he was leaving everything in good order, he quitted the library, double-locking the door after him. According to his usual habit, he dined at the \emph{Cr merie des Quatre v ques}, read his newspaper, \emph{La Croix}, and at ten o'clock went home to his little house in the Rue du Regard. The good man had no trouble and no presentiment of evil; his sleep was peaceful. The next morning at seven o'clock to the minute, he entered the little room leading to the library, and, according to his daily habit, doffed his grand frock-coat, and taking down an old one which hung in a cupboard over his washstand, put it on. Then he went in to his workroom, where for sixteen years he had been cataloguing six days out of the seven, under the lofty gaze of Alexandre d'Esparvieu. Preparing to make a round of the various rooms, he entered the first and largest, which contained works on theology and religion in huge cupboards whose cornices were adorned with bronze-coloured busts of poets and orators of ancient days. Two enormous globes representing the earth and the heavens filled the window-embrasures. But at his first step Monsieur Sariette stopped dead, stupefied, powerless alike to doubt or to credit what his eyes beheld. On the blue cloth cover of the writing-table books lay scattered about pell-mell, some lying flat, some standing upright. A number of quartos were heaped up in a tottering pile. Two Greek lexicons, one inside the other, formed a single being more monstrous in shape than the human couples of the divine Plato. A gilt-edged folio was all a-gape, showing three of its leaves disgracefully dog's-eared. Having, after an interval of some moments, recovered from his profound amazement, the librarian went up to the table and recognised in the confused mass his most valuable Hebrew, French, and Latin Bibles, a unique Talmud, Rabbinical treatises printed and in manuscript, Aramaic and Samaritan texts and scrolls from the synagogues---in fine, the most precious relics of Israel all lying in a disordered heap, gaping and crumpled. Monsieur Sariette found himself confronted with an inexplicable phenomenon; nevertheless he sought to account for it. - Taken from "The Revolt Of The Angels" written by Anatole France

Be the first to review Anatole France - the Revolt of the Angels. 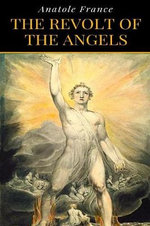 Anatole France - the Revolt of the Angels