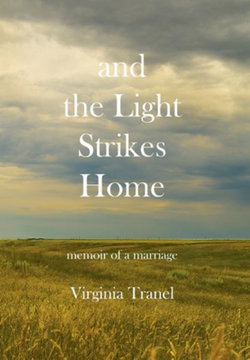 and the Light Strikes Home

And the Light Strikes Home is the memoir of a marriage, the almost-60 year union between Ned Tranel and Virginia Holmberg, an alliance that began as a blind date on Friday, the 13th of May, 1955 and continued until Ned's death on April 14, 2016.

If the measure of a marriage is longevity, this is the story of a successful union, elusive moments of happiness that go by in a blink and often are recognized only in hindsight. But it is also the story of misunderstanding, loneliness, disagreement, discouragement, doubt--both spouses wondering how they could have done better, been more understanding, patient, thoughtful, loving. Ultimately, it is a story of Trying. Trying and failing and Trying again.

The narrative opens in the final semester of Virginia's senior year at Clarke, Dubuque's Catholic college for women. She is engaged to a former high school classmate, an Army private stationed in Germany. The senior prom is approaching. She wants to attend, but has no one to 'take her, ' as people said then, as if she were an umbrella. A friend recommends a 'nice guy' in his final year at Loras, Dubuque's Catholic college for men, a smart, unsophisticated guy who spent the past three years in a dorm designated for young men who've expressed interest in becoming a priest.

A nice guy named Ned, six feet tall, dark hair, studious brown eyes, neither timid nor ill-at-ease, instead a kid out for recess, compensating for musical deficits by stepping to the beat of his own drummer. At evening's end, undaunted by the engagement ring on Virginia's left hand, he kisses her good night, generously and with fervor. She kisses him back. And their story begins.


Virginia Tranel was born and raised in Dubuque, Iowa, and graduated from Clarke College with a degree in English and Spanish. In January, 1957, she married Ned Tranel and moved west, settling in Montana. Her essays have appeared in magazines and anthologies, including the Notre Dame Press anthology of best essays, Family. Her first book, Ten Circles Upon the Pond, a collection of essays on child rearing and family, was published by Knopf in 2003. Tranel's second book, Benita: Prey for Him, published in 2010 by 1st World, describes a classmate's twenty-year entanglement with a Catholic priest. In her current book, And the Light Strikes Home, Tranel tells the story of two individuals trying to assert their individuality while remaining committed to the promise of their union in marriage.

Be the first to review and the Light Strikes Home.

and the Light Strikes Home