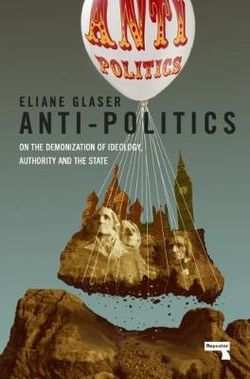 On The Demonization of Ideology, Authority and The State

In recent years, the West has seen a rising tide of populist and anti-political feeling. Figures like Donald Trump and Nigel Farage have gained power by distancing themselves from “the establishment” and portraying politics itself as the enemy of the people.

And it’s not just them - increasingly, the media and politicians of all stripes hurl the word “ideological” as an insult, tie themselves in knots to avoid mentioning “the working class,” and champion the “depoliticising of key decision-making.”

In this book, Eliane Glaser - one of the early commentators to call attention to this new wave of populism - takes stock of how we got here and where we’re going. At the heart of this is a vital question: Is the “death of politics” simply an inevitable sign of the times, going hand in hand with climate change, technological development and postmodern malaise? Or is it the intentional result of right-wing engineering?

In addressing this question, Glaser shows how forces on the Right have manipulated and benefitted from the apathy of anti-politics; and how the Left’s move to centre under neoliberal leaders has helped in the process.

She argues that in order to revive productive engagement and hope for the future, we need to return to three pillars of political philosophy that have become dirty words: ideology, authority and the state. Glaser puts forward a strong and galvanising defence of these foundations, showing that however unpopular they may be, they’re necessary for the functioning of a fair society.

Eliane Glaser is a writer and BBC radio broadcaster. She is a senior lecturer at Bath Spa University and a research fellow at Birkbeck, University of London.

She is the author of Get Real: How to See Through the Hype, Spin and Lies of Modern Life (2012), and writes for the Guardian, the New Statesman and the Independent .

Be the first to review Anti-Politics.