Mutantkind is an endangered species once more. But what better way to ensure your people see the future.than to skip ahead right to it? As the mutant race's last hope is jettisoned into the time stream, the Extraordinary X-Men make a startling discovery: the fate of their kind is about to fall into the hands of one of their most formidable adversaries... the immortal Apocalypse. Now, the X-Men race into a perilous future, desperate to reclaim what was taken from them... and completely unaware of the horrors that await them. Collecting Extraordinary X-Men #6-12 (STC).

Now one of DC Comics cornerstone writers, Jeff was prominent in the publisher's recent New 52 line-wide relaunch as the writer of Green Arrow, Animal Man and Frankenstein: Agent of S.H.A.D.E. He has also written the monthly adventures of Superboy, The Atom, and Justice League Dark.

In 2008 Jeff won the Schuster Award for Best Canadian Cartoonist and The Doug Wright Award for Best Emerging Talent. He also won the American Library Association's prestigious Alex Award, recognizing books for adults with specific teen appeal. He has also been nominated for 5 Eisner awards and 5 Harvey Awards.

In 2010 Essex County was named as one of the five Essential Canadian Novels of the Decade. He currently lives and works in Toronto with his wife and son.

Be the first to review Apocalypse Wars. 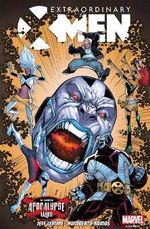