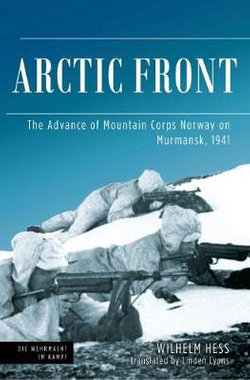 The Advance of Mountain Corps Norway on Murmansk, 1941

The first English translation of a narrative of the German attack on Murmansk in 1941 by the German quartermaster of the Mountain Corps Norway, Wilhelm Hess. In 1941, military operations were conducted by large formations along the northern coast of Scandinavia for the first time in history of warfare. A modern army suddenly swept into that isolated and inhospitable region that was yet to possess the level of importance it would later assume in Cold War polar strategy. The Arctic Front was the northernmost theatre in the war waged by Germany against Russia. For a period of four years, German troops from all branches of the Wehrmacht fought side by side with Finnish border guard units. The high point of the war on the Arctic Front was the assembly and advance of Germany's Mountain Corps Norway in the summer and autumn of 1941. Commanded by general of the mountain troops, Eduard Dietl, and composed of the 2nd and 3rd Mountain Divisions, the Mountain Corps advanced out of occupied North Norway, assembled in the Petsamo Corridor in North Finland, and struck into Russian territory in an attempt to seize Murmansk. It did not reach its objective. This account of the operation was written by Wilhelm Hess, quartermaster of the Mountain Corps Norway. He draws upon his personal experience of the conditions and actions on the Arctic Front in order to describe and analyse the environment, the sequence of events, and the reasons behind certain decisions. In addition to describing how operations conducted by the Mountain Corps unfolded, Hess provides insight as to how the terrain, the flow of supplies, and the war at sea impacted those operations. AUTHOR: Wilhelm Hess was the quartermaster of Germany's Mountain Corps Norway in 1941 and the senior quartermaster of the Twentieth Mountain Army from 1942 until 1944. He wrote this book on the Mountain Corps Norway in German in 1956 and then served in the West German Army from 1956 until 1968.

Be the first to review Arctic Front.

by Wilhelm Hess and Linden Lyons