The major WW2 battle to take "a bridge too far" as described by Antony Beevor for the first time.

In September 1944, having sped through France and Belgium, Montgomery sought to race into Germany and to end the war by Christmas. It wasn't, of course, that simple.

Operation Market Garden would drop Allied troops into The Netherlands, held by Nazi Germany, to secure key bridges across the Rhine along the path of advance. But it was folly - in the Dutch staff college exams, any candidate who adopted this plan had been failed on the spot. Indeed, the campaign ended in a glorious defeat, and half of the 12,000 Allied troops taken prisoner.

With his typical authority and skill in bringing a campaign to life, Britain's bestselling historian creates a gripping, vivid narrative that shows why the battle was fought, and lost. With masterful command of material from a vast range of sources, he also paints the human side of war, and its heroes and villains - "more like a prosperous dentist than the head of the Waffen-SS" - and moments of glory and humour too.

This is classic Antony Beevor on an iconic campaign. Antony Beevor's books include Crete - The Battle and the Resistance, which won a Runciman Prize; Paris After the Liberation, 1944-1949 (written with his wife, Artemis Cooper); Stalingrad, which won the Samuel Johnson Prize, the Wolfson Prize for History and the Hawthornden Prize for Literature; Berlin - The Downfall, which received the first Longman ­History Today Trustees' Award; and, most recently, The Battle for Spain. His books have appeared in thirty foreign editions and sold nearly four million copies.

Be the first to review Arnhem. 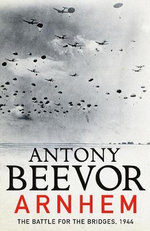 Biography: historical For History Lovers
Hold on while we process your request.