The Making of the Blockbuster Movie

by Bryan Singer and Timothy Shaner

Illustrated with over 300 stills and drawings, including the complete screenplay, the only book on the making of the spectacular X-Men 2 and the X-Men film franchise.

Outcasts from society, the X-Men are genetic mutants, born with superhuman powers, who harness their special abilities for the greater good. But the human race they fight to protect rejects and fears-even hates-them.

Initially realized in the Marvel Comic Book adventures, the first X-Men major feature film was released by Fox in 2000, directed by Bryan Singer, who had previously directed Apt Pupil and The Usual Suspects. Its stunning success-theatrically grossing nearly $300 million worldwide, and becoming a video and DVD phenomenon-signaled the current wave of comics to film adaptations and guaranteed the sequel, which reunites the principal cast members and the original's key creative team, including director Bryan Singer, cinematographer Newton Thomas Sigel, and production designer Guy Dyas.

The new X2 will feature several surprises, including favorite mutant characters from the vast X-Men comics universe, who are new to the film franchise. 300 color illustrations.

Be the first to review Art of X2. 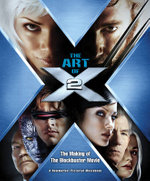 by Bryan Singer and Timothy Shaner

Film Screenwriting techniques Contemporary fiction
Hold on while we process your request.