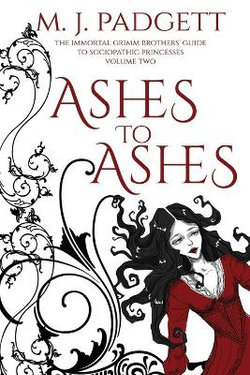 Sierra Monroe and her sister, Cecily, never did have it easy. Bounced from one abusive foster home to another, the sisters could only rely on one thing--each other. Sierra's only focus in her short life has been to take care of Cecily, but that becomes difficult when a group of odd strangers appears in the corner booth of the crummy diner where Sierra works herself half to death. The strangers seem to pop up everywhere, including the middle of the forest where the sisters hunted. Frustrated by the beast inside, Sierra wants nothing more than to rid herself of the pesky wolf, but alas, her prayers go unanswered. In fact, it seems her problems are compounded by the man who insists she and Cecily are descended from royalty, the nieces of the wicked Cinderella.Despite her troubled life, Sierra knows when she's met a crazy person and does her best to do what she's always done, protect Cecily. She soon learns that might be more difficult a task with new players in the game. In an attempt to rid herself of the band of lunatics once and for all, Sierra agrees to hear them out. However, she never anticipated their story might match her own dreams, nor did she expect a fun new power--burning things to ash with her touch.As more of her past is uncovered, Sierra discovers there's no going back to the life she knew. Before she can process what she barely believes to be true, Sierra finds herself right in the middle of a centuries-old war against evil. With danger lurking around every corner, she must make a choice--accept her role and end the reign of a treacherous queen, or turn her back on them and never remember who she was. Lives are on the line as Sierra is tasked with a huge responsibility, but as usual, she finds a way to make it work... because being the hero of her own story is all she's ever know.The sequel to Snow Kissed will take you deeper into the darkness and add many twists to the already haunting tale of The Black Forest.

Be the first to review Ashes to Ashes.