Asurmen is the first and greatest of the Phoenix Lords, a demigod of battle whose legend spans the stars. He shielded his people from destruction at the time of the Fall, and led his chosen warriors, the Dire Avengers, in defence of the eldar for ten thousand years. A superlative warrior and peerless leader, Asurmen is one of the greatest hopes of the eldar race. 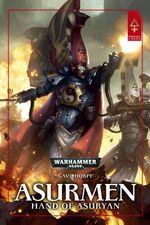