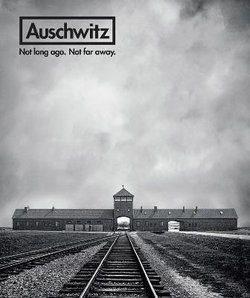 Not Long Ago. Not Far Away.

A story to shake the conscience of the world: the catalogue of the first-ever traveling exhibition on the Auschwitz concentration camp

Auschwitz: Not Along Ago. Not Far Away. opened in December 2017 in Madrid-where it was seen by more than 350,000 visitors-and in May 2019 it will come to the Museum of Jewish Heritage in Lower Manhattan for a two-year stay.

This exhibition-the result of a partnership between the Spanish firm Musealia and the Auschwitz-Birkenau State Museum-uses 600 original objects, 400 images, and 100 stories to provide a comprehensive history of the camp and the role it played in the Holocaust.

The objects range from the intimate (such as shoes and eyeglasses confiscated from victims) to the immense (a Reichsbahn freight wagon, an actual barrack from the Auschwitz III-Monowitz satellite camp); all are eloquent in their testimony.

Many objects are on loan from the Auschwitz-Birkenau State Museum, and have never traveled before. Other objects and images are drawn from collections around the world, public and private, including Yad Vashem, the United States Holocaust Memorial Museum, and the Wiener Library.

The catalog of Auschwitz: Not Long Ago. Not Far Away. is not only a valuable document of this unprecedented exhibition, but one of the best books for general readers on the history of the Auschwitz concentration camp, where 1.1 million people, mostly Jews, but also non-Jewish Poles, Roma, and others lost their lives-a history we can never afford to forget.

Be the first to review Auschwitz.