Christmas in Australia on a scorching summer's day, hey! Strewth! This book is chock-a-block with bonzer activities-puzzles, mazes, join-the-dots, games and more. Everything you need for a beaut Christmas! Nick Bland's comical illustrations show the whole family enjoying Christmas Day: see who you can recognise! The book includes sticker scenes for you to build your own pictures.

Nick Bland was born on a farm in the Australian Yarra Valley in 1973. The son of an artist and a primary school teacher, he spent his early childhood climbing haystacks and making mischief in his father's studio.

When he moved to “the bush” at age 6, he discovered a wonderful new world and his creativity bloomed. Nick always told family and friends he was going to be a cartoonist and a writer. It wasn't until 1996, when he stumbled into a bookshop job, that he finally found the medium that would bring those two loves together.

Untrained, he spent the next couple of years reading every picture book that hit the shelves and began honing his style as a storyteller and illustrator. He illustrated several readers before sending A Monster Wrote Me a Letter to Scholastic Australia in 2001.

Since then, Nick illustrated I Lost My Kisses and created The Very Cranky Bear. He lives in tropical Darwin, where he works as a guardian for 120 aboriginal boys who board nearby. He loves both of his jobs and hopes to combine them in the near future.

Be the first to review Aussie Jingle Bells Activity and Sticker Book. 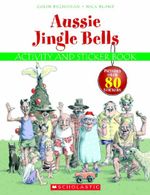