Baby and a Backpack

An Extraordinary Tale of Courage, Hope, Determination and Love

Jane Cornelius lived and worked in Bali, until she met and fell in love with the wrong man, who abandoned her in the UK, leaving her five months' pregnant and with no money or home. Desperate, she turned to her father, but he abandoned her too and she had to ask the Social Services for support. In a tiny cottage in Glastonbury, her daughter Poppy was born. Haunting memories of her family returned - her famous British wrestler father, her insane gypsy cook mother, and her 'Bunny Mother of the Playboy Club' stepmother. The memories motivated her to dream of a different life for her daughter. She sold everything that had been given to her to survive and bought an around-the-world ticket. When Poppy was a 12-week-old baby, they left the UK and travelled through Bali, across Australia, Hawaii and America and Jane didn't give up until she found what she was looking for.

Be the first to review Baby and a Backpack. 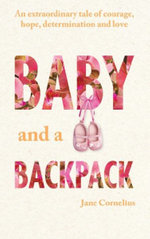 Baby and a Backpack

Travel writing Biography: general
Hold on while we process your request.