Ridin' Her Rough He kept his distance... She saved her virginity... Torque Morrison is a biker without roots, and he likes it that way. The pierced and tattooed member of the Phoenix MC Nomads is a bad boy who's lived hard and struggled with addiction-of the curvy variety. Torque knows he should stay away from Rush Falls, but that's easier said than done. The town is home to the one woman he can't have, Delilah Stringer, daughter of the president of the Rush Falls Chapter. The outlaws Delilah grew up around are protective. They'd never approve of her being with a player like Torque. But Delilah, never a shrinking violet, has plans of her own. Screwed He intended to screw the enemy, not fall for her... Jesse Jenkins is not the kind of man to settle down or follow rules. He does what he likes, and who he likes, whenever he likes. When the President of the Demons MC asks him for a favor, he figures it shouldn't be too hard at all. Just seduce Piper Rix, the rival president's daughter, get the information they need, and get out. When Piper discovers Jesse's motivation, she's heartbroken. Then Jessie discovers his pretend feelings have become all too real. Now he's determined to claim the woman he loves for his own.

Be the first to review Bad Boys. 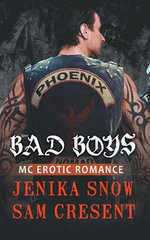