Bait: off-Color Stories for You to Color

Be the first to write a review
Tweet
RRP  $38.99 $38.35
An all-new collection of short fiction from the author of Fight Club, that also doubles as an adult coloring book New York Times bestselling novelist Chuck Palahniuk presents Bait: Off-Color Stories for You to Color, his first ever coloring book for adults. Bait is both the coloring book debut and the second short story collection for Palahniuk, author of Lullaby and Fight Club. The 8.5 x 11 inch hardcover album contains eight bizarre tales, illustrated in detailed black and white by Jo lle Jones (Lady Killer), Lee Bermejo (The Suiciders), Duncan Fegredo (Hellboy), and more. Each story is paired with pieces of colorable original art, nearly 50 in all Palahniuk invites readers to collaborate on this unprecedented hardcover edition: "Maybe between your colors, the artists' designs, and my stories we can create something that endures. Something worth keeping. Let's create a well-bound book that can sit on any shelf and be available for a new generation to discover and enjoy." Palahniuk's short stories are provocative and not for the faint of heart. (His public readings are notorious for making audience members pass out.) Kirkus Reviews described Palahniuk's 2015 short story collection Make Something Up: Stories You Can't Unread as "Pathos and panic and penitence from one of the darkest and most singular minds in contemporary American lit." Bait continues in that vein with stories about:
A passenger on the Titanic who finds a surgical solution to the obstacle of "women and children first." A Hollywood star whose fading brand faces a viral (and scatological) internet campaign. An animal psychic who coaxes a statement from a fish that witnessed a political assassination. Increasingly terrible birthday gifts that place a girl at the center of an extinction-level event. Reviews for 2015's Make Something Up "Palahniuk finds sincerity among his characters even in disreputable occurrences."-- Publishers Weekly "He makes it absolutely clear that he's still the man who wrote 'Guts, ' the infamous story that made fans pass out at readings." --Kirkus Reviews Reviews for Fight Club 2: "At turns deeply poignant and very funny, Palahniuk's freakish fables capture a twisted zeitgeist and add an oddly inspirational and subversive voice to the contemporary canon . . . In the post-9/11 present, a hyperactive, Internet-obsessed, war- and recession-weary America apparently needs Tyler again."--The Atlantic "Chuck Palahniuk's Fight Club 2 is as much a kinetic read as it is a pivotal watermark for the comic industry to receive such a high-profile cross-media debut. We are Jack's eager eyes."--Paste

Chuck Palahniuk is the bestselling author of fifteen fictional works, including Fight Club, Invisible Monsters, Survivor, Choke, Lullaby, Diary, Haunted, Rant, Pygmy, Tell-All, Damned, Doomed, Beautiful You, and, most recently, Make Something Up. He lives in the Pacific Northwest.

Be the first to review Bait: off-Color Stories for You to Color. 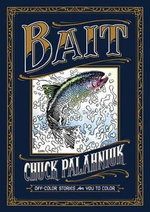 Bait: off-Color Stories for You to Color