Ballad For A Mad Girl 1

Ballad for a Mad Girl is a ghost thriller with a literary angle. An action-packed page turner about survival and the different ways we deal with grief.

Everyone knows seventeen-year-old Grace Foley is a bit mad. She's a prankster and a risk-taker, and she's not afraid of anything except losing. As part of the long-running feud between two local schools in Swanston, Grace accepts a challenge to walk the pipe. That night she experiences something she can't explain.

The funny girl isn't laughing anymore. She's haunted by voices and visions - but nobody believes a girl who cries wolf.

As she’s drawn deeper into a twenty-year-old mystery surrounding missing girl Hannah Holt, the thin veil between this world and the next begins to slip. She can no longer tell what's real or imagined - all she knows is the ghosts of Swanston, including that of her own mother, are restless. It seems one of them has granted her an extraordinary gift at a terrible price.

Everything about her is changing her body, her thoughts, even her actions seem to belong to a stranger. Grace is losing herself, and her friends don’t understand. Is she moving closer to the truth? Or is she heading for madness?

Vikki Wakefield's first YA novel, All I Ever Wanted, won the 2012 Adelaide Festival Literary Award for YA Fiction, as did her second novel, Friday Brown, in 2014.

Friday Brown was also an Honour Book at the Children's Book Council of Australia, in 2013, and was shortlisted for the prestigious Prime Minister's Awards.

Vikki's third novel, Inbetween Days, was Highly Commended in the 2016 Barbara Jefferis Award, was a 2016 CBCA Honour Book and was shortlisted for the 2016 Prime Minister's Awards.

Vikki lives in the Adelaide foothills with her family. 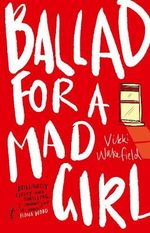 Ballad For A Mad Girl