First, in a story written by legendary Batman writer Dennis O'Neil, Batman returns from a case to find Alfred missing, while rumors of human sacrifice and strange, primitive rituals circulate in Gotham City. The second story, written by Grant Morrison and featuring art by Klaus Janson (BATMAN- THE DARK KNIGHT RETURNS), the Dark Knight Detective must defeat an immortal killer while dealing with a terrifying horror from Bruce Wayne's youth. And in the third story, written by Doug Moench with art by Paul Gulacy, Batman confronts one of his oldest foes, Dr. Hugo Strange, who has formed a Gotham City task force to stop the Dark Knight.Collects BATMAN- LEGENDS OF THE DARK KNIGHT #1-15.

Be the first to review Batman: Shaman. 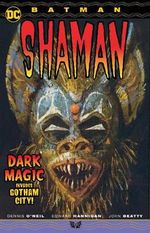 Graphic novels: superheroes & super-villains Graphic Novels
Hold on while we process your request.