Stanas, brewmaster and stable-keeper, is extending the cellar in the Old Tree Guesthouse. A collapse occurs, Stanas is trapped, injured. Nisha Fairsight comes to his aid with her fire magic. In doing so, a pit is uncovered. This pit has been the hiding place for a mysterious statue of two warriors. Nisha s fire magic washes over the statue and it begins to glow. The next day, an exotic warrior comes from the rift caves and demands the statue. Arna Greentower, the proprietor of the Old Tree, and Nisha, refuse, unconvinced by the warrior s claim. Hot on the heels of this, another exotic warrior descends from the rift caves and claims the statue. These two warriors are implacable enemies and are the figures represented on the statue, although they deny this. The two warriors fight a titanic battle, but they are perfectly matched and cannot defeat each other. They part, swearing vengeance, and they go about recruiting armies in Quentaris to win the day. Their powers of oratory are powerful, and many who hear their harangues fall under their spell, including Nisha and Tal. However, Nisha is swept away by one warrior while Tal follows the other. They are on opposite sides! Nisha finally manages to break the spell that holds her. She then must free Tal, Arna and the recovered Stanas as well as other prominent Quentaran citizens (Rad, Storm, the Archon). Nisha goes back to the statue that started the struggle. It is still glowing, even more so as the warriors battle. Nisha uses her fire magic in reverse to cool the statue. The warriors fade and become ghostly, but Nisha cannot hold the statue in its cooled state. It must leave Quentaris. Nisha suggests it is banished into an inimical rift world.

Be the first to review Battle for Quentaris. 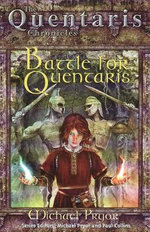