Battle of the Beasts

Since the siblings' last adventure, life in the Walker household is much improved-the family is rich and the Wind Witch is banished. But no Walker will be safe until she is found. Summoning her to San Francisco brings all the danger that comes with h

For over twenty-five years, Chris Columbus has written, directed and produced some of the  most successful box-office hits, which have established him as a major force in contemporary Hollywood film-making.

As a writer, he launched his career with the legendary films Gremlins and The Goonies. Columbus directed and produced the first two films in the blockbuster Harry Potter series and produced the third.

More recently, Columbus has directed features such as the hit film Percy Jackson & the Olympians: The Lightning Thief. As adirector, Columbus has been at the helm of such films as Home Alone and Mrs. Doubtfire.

Be the first to review Battle of the Beasts. 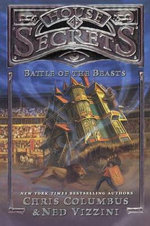 Battle of the Beasts