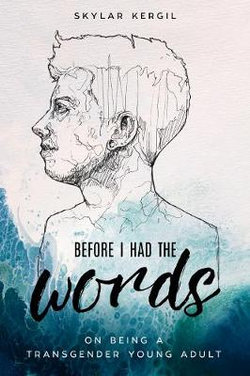 Before I Had the Words

On Being a Transgender Young Adult

This book features in our Read the Rainbow Guide

At the beginning of his physical transition from female to male, then-seventeen-year-old Skylar Kergil posted his first video on YouTube.

In the months and years that followed, he recorded weekly update videos about the physical and emotional changes he experienced. Skylar?s openness and positivity attracted thousands of viewers, who followed along as his voice deepened and his body changed shape.

Through surgeries and recovery, highs and lows, from high school to college to the real world, Skylar welcomed others on his journey. Before I Had the Words is the story of what came before the videos and what happened behind the scenes.

From early childhood memories to the changes and confusion brought by adolescence, Skylar reflects on coming of age while struggling to understand his gender.

Be the first to review Before I Had the Words.

Before I Had the Words