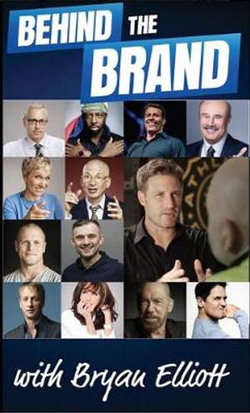 Stories from some of the most intriguing innovators, entrepreneurs and the reasons behind their success.

During the heydays of movies on DVD and VOD, young, ambitious Universal Pictures brand marketing manager Bryan Elliott was climbing the corporate ladder quickly while also dreaming of starting his own production company. With a family and 4 young children at home there was also a lot at stake and taking big risks just wasn't an option. The studio job provided a great salary and plenty of big budget-style exposure like managing a $30M p&l, crafting national ad campaigns, personally interfacing with movie stars and iconic directors for BTS (behind-the-scenes) original content as well as working with an amazing team of talented creatives. Despite his success Elliott was becoming increasingly anxious to start something on his own and was secretly working on his Plan B.

Inspired by creators like Steven Spielberg and Ron Howard, he dreamed of the day he could move into production and create his own original content to tell compelling stories. It wasn't until 2005, when a little website called Youtube launched signaling that the playing field was leveling out for newcomers, and everything shifted. For the first time in history, storytellers could go direct to their audience, publish videos for free and didn't need mass distribution or permission from a network.

Over the next couple of years, high quality, low-priced production equipment like DSLR cameras and the introduction of the iPhone effectively obliterated the high walls and barriers to entry and Elliott knew this was his time. After side-hustling for years with filmmakers and other production professionals to learn the business, he finally felt ready to cut the cord.

Elliott left the studios to launch his new digital production company start-up in Nov. 2007 with a comfortable number of client projects waiting in the wings. Unfortunately, he had no idea he was sailing directly into the perfect storm of what would become the great recession.

A deep sense of fear and panic set in as Elliott watched all of the intended projects fall through when the bottom dropped out of the economy in 2008. In that moment he returned to his brand marketing roots and poured over ideas about how to solve his own problem. The answer was to reach out to people he admired to create a show that literally took him (and his audience) behind their brand to learn the secrets of their success.

Bryan did more than survive: He built a series on Youtube that is now watched by millions of people and has a syndication partnership with Fast Company and Inc. Magazine. He is sought-after writer, director, producer, speaker and host. Elliott has a unique POV that very few, if any, can replicate. That is, he is in the trenches with his audience. Journalists from NPR often try and document similar case studies but lack actual business experience and context. Mega successful entrepreneurs-turned-show "hosts" are mainly in the game to promote themselves. Elliott's approach is about shining the spotlight on his guests and asking the kinds of questions that reveal practical answers to help others improve their life and business.

Be the first to review Behind the Brand.