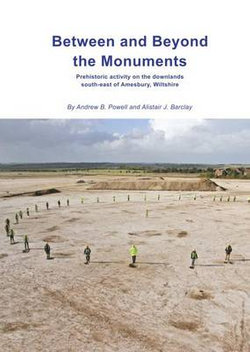 Between and Beyond the Monuments

Prehistoric Activity on the Downlands South-East of Amesbury

by Alistair Barclay and Andrew Powell
Hardback
Publication Date: 31/07/2021
Be the first to write a review
Tweet

This book reports on the prehistoric archaeology revealed by investigations of a large area of Chalk downland south-east of Amesbury, Wiltshire. Excavations on the site between 1993 and 2015 revealed Neolithic monumental features, a significant number of Beaker and other Early and Middle Bronze Age burials and funerary deposits, numerous prehistoric pits, and evidence for Iron Age and Romano-British settlement, landscape organization and burial. The present volume covers the wider prehistoric remains from the site, describing all features of Mesolithic, Neolithic, Bronze Age and Iron Age date. The prehistoric monuments, pits and extensive sequence of burials are placed in their wider landscape context, and the development, chronology and variability of prehistoric ritual and mortuary practices is explored, along with the evidence for late prehistoric settlement. Individually, some of the discoveries are of national significance. Collectively, they reveal the development and transformation of a landscape rich in ritual, mortuary and settlement features during an almost continuous period of over 3000 years, the significance of which is enhanced by the site's position immediately east of the Stonehenge World Heritage Site.

Be the first to review Between and Beyond the Monuments.

Between and Beyond the Monuments

by Alistair Barclay and Andrew Powell