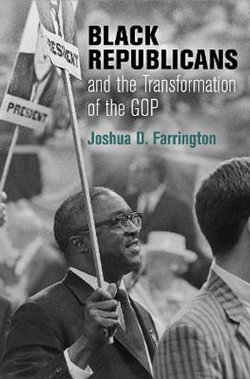 Black Republicans and the Transformation of the GOP

Reflecting on his fifty-year effort to steer the Grand Old Party toward black voters, Memphis power broker George W. Lee declared, "Somebody had to stay in the Republican Party and fight." As Joshua Farrington recounts in his comprehensive history, Lee was one of many black Republican leaders who remained loyal after the New Deal inspired black voters to switch their allegiance from the "party of Lincoln" to the Democrats.

Ideologically and demographically diverse, the ranks of twentieth-century black Republicans included Southern patronage dispensers like Lee and Robert Church, Northern critics of corrupt Democratic urban machines like Jackie Robinson and Archibald Carey, civil rights agitators like Grant Reynolds and T. R. M. Howard, elected politicians like U.S. Senator Edward W. Brooke and Kentucky state legislator Charles W. Anderson, black nationalists like Floyd McKissick and Nathan Wright, and scores of grassroots organizers from Atlanta to Los Angeles. Black Republicans believed that a two-party system in which both parties were forced to compete for the African American vote was the best way to obtain stronger civil rights legislation. Though they were often pushed to the sidelines by their party's white leadership, their continuous and vocal inner-party dissent helped moderate the GOP's message and platform through the 1970s. And though often excluded from traditional narratives of U.S. politics, black Republicans left an indelible mark on the history of their party, the civil rights movement, and twentieth-century political development.

Black Republicans and the Transformation of the GOP marshals an impressive amount of archival material at the national, state, and municipal levels in the South, Midwest, and West, as well as in the better-known Northeast, to open up new avenues in African American political history.

Be the first to review Black Republicans and the Transformation of the GOP.

Black Republicans and the Transformation of the GOP