BLOOD, SALT, WATER is a gripping tale of greed, power and misconception from acclaimed two-time winner of the Theakston's Crime Award, Denise Mina.

Loch Lomond is a mile deep but the woman's body surfaced anyway. Found bludgeoned and dumped in the water, she now haunts Iain Fraser, the man who put her there. She trusted him and now that misplaced trust is gnawing through Iain's chest. He thinks it will kill him.

Nearby Helensburgh is an idyllic Victorian town. One-time home to a quarter of all the millionaires in Britain, it is quaint, sleepy and chocolate-box pretty. But the real town is shot through with deception, lies and vested interests.

As tensions rise and the police seek a killer, the conflicts that lurk beneath Helensburgh's calm waters threaten to explode. All Iain Fraser has to do is keep on lying.

"Mina is one of the most fiercely intelligent of crime writers . . . testament to how brilliantly intricate and psychologically complex her books are" - GUARDIAN

"The elegance of the plotting . . . Mina's writing is lithe and spare, but alert" - SCOTSMAN

About the Author
Denise Mina is a critically acclaimed Glaswegian crime writer. Her novels include The End of the Wasp Season and Gods and Beasts, both of which won the prestigious Theakstons Old Peculiar Crime Novel of the Year Award in consecutive years. Denise also writes short stories and in 2006 wrote her first play. She is a regular contributor to TV and radio.

After a peripatetic childhood in Glasgow, Denise Mina left school at 16 before doing her law degree at Glasgow University. Her first novel, Garnethill, was published in 1998 and won the CWA John Creasey Dagger for Best First Crime Novel.

She has published twelve novels including the Garnethill trilogy, the Paddy Meehan series and the Alex Morrow series. She has been nominated for many prizes including the CWA Gold Dagger and has won the Theakston Old Peculier Crime Novel of the Year Award twice. In addition to novels, Denise has also written plays and graphic novels including the adaptation of The Girl with the Dragon Tattoo.

In 2014, she was inducted into the Crime Writers’ Association Hall of Fame. She has also presented TV and radio programmes as well as appearing regularly in the media. She lives and works in Glasgow.

Be the first to review Blood. 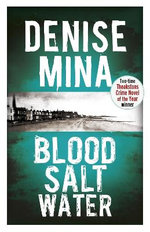