Landon came into Lyric's life three years ago when his mother married her father. Landon is hardened, rough around the edges, and has a chip on his shoulder. He's a bad boy who boxes, and seems to hate the world. But Lyric wants him. Lyric doesn't want to ignore what she feels for Landon, but she can't help but worry what others will say if they had a relationship: wrong, twisted, disgusting. But when a fellow classmate drunkenly assaults her, it's Landon who saves her. It's after this that her emotions morph into something stronger. Landon has been called many things: deviant, destructive, and an all around bad boy. But he's never cared what anyone thought, not until Lyric. It only takes opening up to her to see that she's it for him. But how can she possible want a guy like him? Is Landon even capable of giving her everything she deserves? Can he control himself and protect her when she's attacked again?

Be the first to review Blurred Lines. 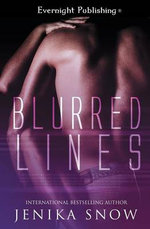