The Book of Never (4-5) brings together Never's final two adventures as he searches for the truth behind his mysterious heritage and the curse on his blood.

The Peaks of Autumn

At Snow's urging, Never climbs into the Folhan Mountains to search for the Altar of Stars, which he must reach by the new moon. Yet he cannot shake off his doubts; will the answers he seeks even reside with the altar? Or is Snow manipulating him once more?

Never soon finds that the mountains harbour their own threats, from avalanches and enemy troops to ancient creatures deep within abandoned mines and worse - pursuit from a vengeance-obsessed King.

Only one thing stands between Never and answers - his brother.

Driven toward the enemy-occupied Imperial City, Never's doubts grow. Even with new knowledge about his powers, can he truly keep his friends safe in a warzone? Or, like too many times before, will he end up responsible for the deaths of those he should have protected?

Never faces a bitter choice between finally winning the answers he has searched for all his life and stopping his brother once and for all. Worse, he knows that if he hesitates, Snow's sinister vision for the world will come to pass.

Be the first to review Book of Never (Collection Two). 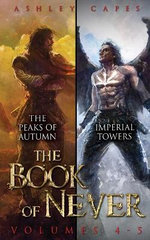