Be the first to write a review
Tweet
RRP  $12.99 $11.75
Truman Capote's Breakfast at Tiffany'sis a brilliant glimmer of the excitement of 40's New York. Holly Golightly - brashly beautiful with a slim black dress, a mysterious past and dark glasses over varicoloured eyes - entrances all the men she meets, including the young writer living above her, though her recklessness may yet catch up with her. Also containing three short stories, this edition shows the elegance and warmth of Capote's writing at its most flawless.

Truman Capote was born in New Orleans in 1924 and was raised in various parts of the south, his family spending winters in New Orleans and summers in Alabama and New Georgia.

By the age of fourteen he had already started writing short stories, some of which were published. He left school when he was fifteen and subsequently worked for the New Yorker which provided his first - and last - regular job.

Following his spell with the New Yorker, Capote spent two years on a Louisiana farm where he wrote Other Voices, Other Rooms (1948). He lived, at one time or another, in Greece, Italy, Africa and the West Indies, and travelled in Russia and the Orient.

He is the author of many highly praised books, including A Tree of Night and Other Stories (1949), The Grass Harp (1951), Breakfast at Tiffany's (1958), In Cold Blood (1965), which immediately became the centre of a storm of controversy on its publication, Music for Chameleons (1980) and Answered Prayers (1986), all of which are published by Penguin. Truman Capote died in August 1984.

Be the first to review Breakfast at Tiffany's. 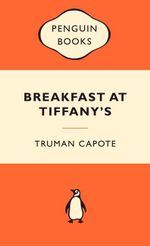 Fiction Classic Popular Penguins
Hold on while we process your request.