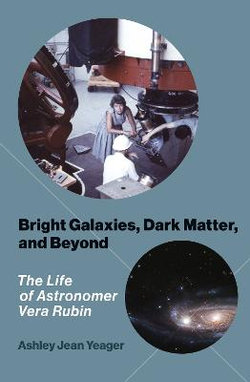 Bright Galaxies, Dark Matter, and Beyond

The Life of Astronomer Vera Rubin

How Vera Rubin convinced the scientific community that dark matter might exist, persevering despite early dismissals of her work.
&nbsp;

We now know that the universe is mostly dark, made up of particles and forces that are undetectable even by our most powerful telescopes. The discovery of the possible existence of dark matter and dark energy signaled a Copernican-like revolution in astronomy: not only are we not the center of the universe, neither is the stuff of which we're made. Astronomer Vera Rubin (1928-2016) played a pivotal role in this discovery. By showing that some astronomical objects seemed to defy gravity's grip, Rubin helped convince the scientific community of the possibility of dark matter. In&nbsp;Bright Galaxies, Dark Matter, and Beyond, Ashley Jean Yeager tells the story of Rubin's life and work, recounting her persistence despite early dismissals of her work and widespread sexism in science.
&nbsp;
Yeager describes Rubin's childhood fascination with stars, her education at Vassar and Cornell, and her marriage to a fellow scientist who happened to be a student of Richard Feynman. (Feynman was later Rubin's own physics adviser.) At first, Rubin wasn't taken seriously; she was a rarity, a woman in science, and her findings seemed almost incredible. Some observatories in midcentury America restricted women from using their large telescopes; Rubin was unable to collect her own data until a decade after she had earned her PhD. Still, she continued her groundbreaking work, driving a scientific revolution. She received the National Medal of Science in 1993, but never the Nobel Prize--perhaps overlooked because of her gender. She's since been memorialized with a ridge on Mars, an asteroid, a galaxy, and most recently, the Vera C. Rubin Observatory--the first national observatory named after a woman.
&nbsp;

Be the first to review Bright Galaxies.

Bright Galaxies, Dark Matter, and Beyond