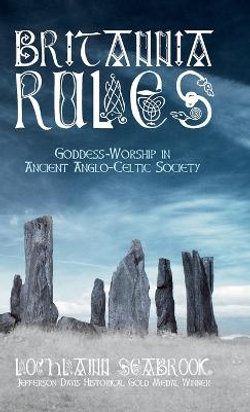 Britannia Rules: Goddess-Worship in Ancient Anglo-Celtic Society, by award-winning author and historian Lochlainn Seabrook, is a unique and captivating book that celebrates a seldom discussed, yet long and noble English, Welsh, Irish, and Scottish tradition; one that dates back to the earliest inhabitants of the British Isles: female-based religion.


In this one-of-a-kind illustrated work Colonel Seabrook overturns the long-standing notion that the first Britons and Celts were "patriarchal" and that they worshiped a male "Heavenly Father." Using the latest archaeological, anthropological, etymological, onomastic, historical, and mythological evidence, he shows that both the Anglo-Saxons and the Celts were matriarchal peoples who venerated the Supreme Being in female form.


This "Heavenly Mother" of the early Celto-Britons was none other than the universal "Great Goddess," venerated around the ancient world under a myriad of names, and who manifested in ancient Egypt as Isis, in Judaism as Asherah, in Hinduism as Kali Ma, in Gnostic Christianity as Sophia, in orthodox Christianity as Mary, in Buddhism as Mara, and in the British Isles as Britannia.


In light of the overwhelming worldwide reemergence of feminine spirituality, the advent of the Goddess Reclamation Movement, the recent resurgence of British and American interest in traditional Anglo-Celtic culture, and the new found interest in the real relationship between Jesus and Mary Magdalene, Britannia Rules is a topical work; one that will be read with keen interest, not only by those readers who are of English and Celtic heritage, but by people of all nationalities and faiths. Available in paperback and hardcover.


Lochlainn Seabrook, 40th great-grandson of the iconic Celto-British warrioress Queen Boudicca, is the author and editor of over 70 adult and children's books that have introduced hundreds of thousands to truths that have been left out of our mainstream history books. As he shares similar subjects and writing styles with them, he has been called the "American Robert Graves" and the "Southern Joseph Campbell." The 6th great-grandson of the Earl of Oxford, Seabrook is a Kentucky Colonel and a 7th generation Kentuckian of Appalachian heritage. He is a recipient of the prestigious Jefferson Davis Historical Gold Medal and a lifelong writer, whose books span a broad range of topics, from history, biography, nature, politics, science, and self-help, to religion, mythology, pictorials, screenplays, exposes, and the paranormal. He is the author of the best selling reference book, Seabrook's Bible Dictionary of Traditional and Mystical Christian Doctrines.


His other titles include: Jesus and the Law of Attraction; The Bible and the Law of Attraction; Jesus and the Gospel of Q; Christ Is All and In All: Rediscovering Your Divine Nature and the Kingdom Within; The Book of Kelle: An Introduction to Goddess-Worship and the Great Celtic Mother-Goddess Kelle; The Goddess Dictionary of Words and Phrases; Princess Diana: Modern Day Moon-Goddess - A Psychoanalytical and Mythological Look at Diana Spencer's Life, Marriage, and Death (with Dr. Jane Goldberg); Aphrodite's Trade: The Hidden History of Prostitution Unveiled; Carnton Plantation Ghost Stories: True Tales of the Unexplained From Tennessee's Most Haunted Civil War House!; UFOs and Aliens: The Complete Guidebook; and Everything You Were Taught About the Civil War is Wrong, Ask a Southerner!

Be the first to review Britannia Rules.