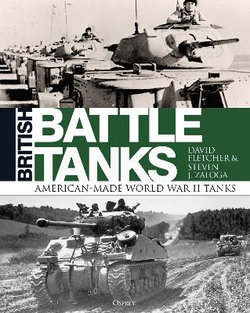 The idea of British soldiers using American tanks was not viewed with a great deal of enthusiasm by the British Army.

They perceived American tanks as being crudely made, mechanically unsophisticated and impossible to fight in. However, once British crews got used to them and learned to cope with some of their difficulties, such as limited fuel capacity and unfamiliar fighting techniques, they started to see them in a far more positive light, in particular their innate reliability and simplicity of maintenance.

This book, the last in a three-part series on British Battle Tanks by armour expert David Fletcher, concentrates on World War II and studies American tanks in British service, some of which were modified in ways peculiar to the British. It shows how the number of these tanks increased to the point that they virtually dominated, as well describing some types, such as the T14 and M26 Pershing, which were supplied but never used in British service.

David Fletcher MBE was born in 1942. He has written many books and articles on military subjects and until his retirement was the historian at the Tank Museum, Bovington, UK.

He has spent over 40 years studying the development of British armoured vehicles during the two World Wars and in 2012 was awarded an MBE for services to the history of armoured warfare.

Steven J. Zaloga received his BA in History from Union College and his MA from Columbia University. He has worked as an analyst in the aerospace industry for over three decades, covering missile systems and the international arms trade, and has served with the Institute for Defense Analyses, a federal think tank.

He is the author of numerous books on military technology and military history, with an accent on the US Army in World War II as well as Russia and the former Soviet Union. He lives in Maryland, USA.

Be the first to review British Battle Tanks.