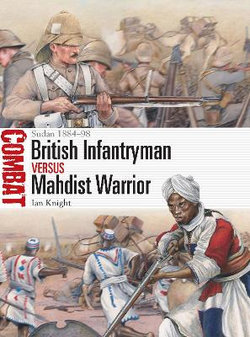 by Ian Knight and Raffaele Ruggeri
Paperback
Publication Date: 17/08/2021
Be the first to write a review
Tweet
$37.40

A new study of the battles fought between Queen Victoria's infantry and the formidable Madhist Army in the Sudan, from the Gordon Relief Expedition of 1884-85 to the battle of Omdurman in 1898.

In 1882, the United Kingdom intervened in the affairs of independent Egypt, overthrowing a nationalist revolt, with the intention of securing British strategic interests along the Suez Canal. Subsequently drawn into a series of confrontations in Egypt's southern colony, the Sudan, British troops would face a determined and capable foe amid some of the world's most inhospitable terrain.

In a bid to throw off Egyptian colonial rule, in 1881 an Islamic fundamentalist revolt had broken out in the Sudan. It was led by a religious teacher named Mohammed Ahmad Ibn al-Sayiid Abdullah, who proclaimed himself al-Mahdi, "The Guided One." After routing Egyptian forces led by British officer Colonel William Hicks at the battle of Shaykan in November 1883, the Mahdi began to organize his followers along more centralized lines. In an effort to restore Egyptian authority the British dispatched Colonel Charles Gordon to the Sudanese capital of Khartoum with orders to evacuate Sudanese personnel at risk from the Mahdist uprising. Once there Gordon refused to leave the city, prompting the British Government to dispatch a relief column to rescue him. In the event, the Mahdi stormed Khartoum on January 26, 1885. Gordon himself was killed.

With the fall of Khartoum British troops abandoned much of the Sudan. Mahdist troops attempted to carry their revolt into Egypt itself but were defeated by Egyptian troops under British command in 1888. In 1896, public opinion in the UK, stimulated by a fear of rival French influence in equatorial Africa, prompted the British to attempt again to conquer the Sudan. In 1898, the Mahdists faced the British outside the Mahdist capital at Omdurman in a battle that would decide the fate of the Sudan for generations.

Featuring specially commissioned artwork, this study examines the changes which the prolonged fighting brought to both sides, considering battles such as Abu Klea (January 16-18 1885) during the bid to relieve Gordon in Khartoum, Tofrek (March 22 1885) in which Beja tribesmen broke a British square, and the final confrontation at Omdurman (September 2 1898).

Ian Knight is widely acknowledged as a leading authority on the colonial campaigns of the Victorian Empire. He has written over 30 books on the subject including Men-at-Arms, Campaign, Essential Histories, Elite and Fortress titles for Osprey, including the Queen Victoria's Enemies series.

He has worked on a number of television documentaries and is a founder member of the Victorian Military Society. He has received awards for his work on campaigns in southern Africa during the 19th century, notably the Anglo-Zulu War. He lives in West Sussex, UK.

Be the first to review British Infantryman vs Mahdist Warrior.

by Ian Knight and Raffaele Ruggeri